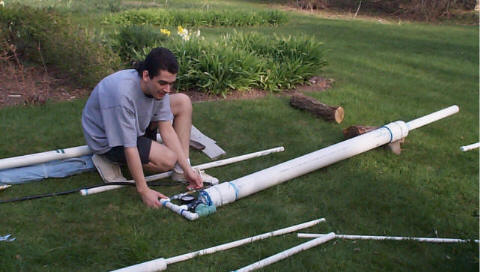 Now you are probably looking at the pictures and wondering "How the heck does this air cannon work?" Well I'm going to explain that to you using my own terminology:

One of the things that puzzled me most when building this cannon was "how the heck does the air get around the piston, if there is no air holes?" Well, I'm still not exactly sure how it works, but the air definitely gets around the piston and fills the air chamber. I know that is does, simply because it uses ALL of the air in the air compressor and requires the air compressor to turn on to fill it up the rest of the way. Not to mention when the cannon is fired, it packs a punch!

How the cannon was built:

First off I would like to thank Allen Grahn, who without his help, it would have taken me a long time to get the 3" coupler, 5 3/4" galvanized disks and the 4"x2" bushing all grinded down to fit on the cannon!

The first problem I ran into when scouting out the parts at Eagle, was that the 4" PVC pipe that is labeled 4 INCHES IS NOT 4" ID. It is instead about 3.85" ID. "So what?" Well try to fit that 3" coupler, with an OD of 4", into the 4" pipe with an ID of 3.85." Doesn't quite fit, huh? :) Instant problem. In fact, this problem almost made me cancel my plans to build the IOD M02. That is until my friend, Chris, let me know he had the ability to grind it down.

The next problem was trying to find fender washers that were 3.5" in diameter! The largest we could find were 2" washers. So we decided to head down to NPS warehouse. We figured if anything, we could at least find some metal that we could cut. While looking through all the racks and bins I ran across a pack of eight 5 3/4" galvanized disks. Ah yeah! Went up to the counter to get a price (I was guessing a few dollars) and was told $0.50 for all eight!! Bad Ass!

Now the final problem was getting a hold of some neoprene. None of the local hardware stores we stopped at carried neoprene but at least one of the employees knew what neoprene was and referred us elsewhere. At this point though, it was getting late afternoon, so I would have to wait until tomarrow to followup on the new source.

After all of the running around town trying to find the remaining items, we headed up to Chris's house to work on the cannon.

With the much appreciated(!) help of Chris's Dad, the 3" coupler was put into the metal lathe and the process of grinding it down was started. Scrape, scrape, scrape, etc, etc. This was a very tedious process because the chance that the plastic could warp was high! After about 1 1/2hrs the process was completed and the coupler could slide relatively easily through the entire length of the 4" pipe.

Now it was time to cut the 5 3/4" discs down to 3.5." This process would be the hardest, because two discs would be cut at the same time! If the brace on the discs were to loosen at all, it would shift the discs out of alignment and ruin the cut. Not to mention the possibility of damage to the cutting blade and the lathe. The process of cutting the discs took a while, simply because the cutting blade was moved forward EXTREMELY slow.

Finally both of the discs were cut and then trimmed down a little bit to fit in the coupler. With a quick pass under the belt sander the discs were finished! 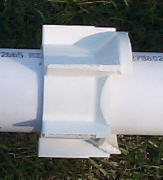 Now onto the remaining item to cut; the 4"x2" bushing. This would act as a centering support for the 2" pipe inside of the 4" pipe. This last item I'm guessing took the longest period of time, just because most of the plastic had to be cut away to get to the fins. It really is sad too, because this item went from a value of $4.38 to maybe $1.00. Oh well, at least this way it will definitely center the 2" pipe!

After the bushing was grind down to the fins and cleaning up of all the plastic. We used the mill to remove the plastic sloping of the bushing, so air could pass between the fins.

As you will notice, there are two lips remaining on the slope. Note: A couple days after this picture was taken, I removed them with a metal file.

Well I headed out early in the afternoon to the place I was referred to for the neoprene . . . Damn, they don't carry it in form I need it in but referred me elsewhere. Unforunately that new source turned into a deadend. ARGH!

Now honestly at this point I wasn't really sure what neoprene was, so I decided to find out what it is. After a quick search on HotBot, I found out what some of the uses of neoprene are. Hmmmm, an automotive parts store may carry this . . . So I called up a couple places. None of them carried what I needed, but on the last call I finally got the referral I needed! Just my luck the new place had already closed for the day. Now since their name (EVCO House of Hose) had a generic product name listed, I decided to look up this category in the Yellow Pages. Bingo! I just found a section listed as "Hose Couplings and Fittings," and they are listed in it, along with a bunch of other companies! So I tried calling a few of the other companies listed, but they were all closed. I will just have to wait until Monday now.

Today I started glueing most of the major pieces of the cannon. It sure is interesting glueing 4" diameter pipe! Talk about a lot of glue. I also ended up glueing the exhaust valve firing section together.

I will be holding off on glueing the 2" pipe and its accompanying bushings until the piston is completely assembled (tomarrow is neoprene day!). That way I can be sure everything is lined up correctly. I'm pretty much finished up for today's work. I will be going up to Chris's house later to help him assemble his own air cannon. 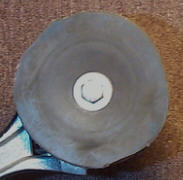 ARGH Talk about a suspenseful two days waiting to contact the new sources! First company I call no longer carries neoprene, but they may have some scraps left over in the bin. Called the next company in the Yellow Pages, they don't carry it. Third company, "Yes, we have what you need, come on down." And that is exactly what I did! Success! I have just gotten a 4"x7" peice of neoprene for $1.15!

Damn, this neoprene sure is tough! Theres no way I am able to cut it with a razor blade, so I power up the band saw and cut a 3.5" circle of neoprene. With a drill I'm able to put a hole through the neoprene and push the bolt through. 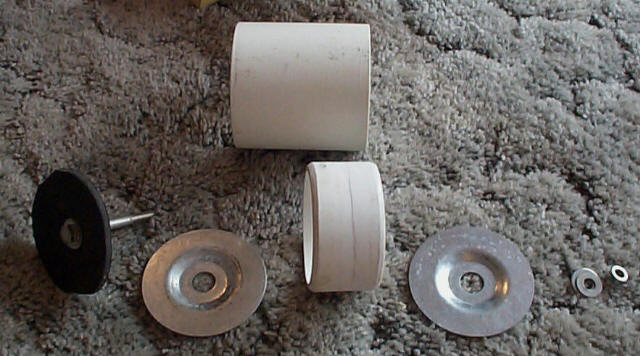 NOTE: Sorry, but its getting late and I won't be able to add the piston design instructions until Saturday afternoon.

Now that the piston is finished, I started working on removing the stoppers from the centers of the 3"x2" and 4"x2" (centering) bushings. That way the 2" pipe will be able to slide through unobstucted. I started off with a razor blade and when that was going too slow, I grabbed a metal file and really went at it (not to mention my thumb and ring finger. :))! I then used some sand paper to smooth out the rough areas. Took a while but I finally got both bushings ready and they slide up and down the 2" pipe.

A little side note: Well I decided to do some quick pressure tests (about 35psi) to see if the piston would seal on the 2" chamber (and hopefully fire), before I glued the front bushings. So I tapped the 3"x2" bushing into the 4"x3" bushing using a hammer and started pressurizing the cannon. The piston did a little "thump" and seals the firing chamber. But not only does it seal the firing chamber, it starts pushing the 2" pipe through its bushing! Talk about force! I ended up pushing the front of the firing chamber into the back of the car tire and on back end I braced it with my foot. Umm, well, that didn't work. It started pushing my foot backwards. :) . . . So I ended up aborting this test and hoped everything would work come tomarrow.

Holding the 2" pipe steady, the 3"x2" bushing was slide (tapped lightly with hammer . . .) down the 2" pipe until it reached the 4"x3" bushing. The 3"x2" bushing was then tapped into the 4"x3" bushing lightly, so that it now hold tight while I push the 2" pipe forward using the piston, until the piston was at the perfect position (the perfect position for me, was about 2 1/2" from the end of the 4" pipe). I now measured how much space I would lose when the front two bushings were sealed, male/female adapters screwed in, and from the vinyl bumpers put in place. The 3"x2" and 2" pipe was now removed and the bushing was slide towards the rear end (the end the piston hits!) five inches, to compansate for the lost space. This would leave the piston with 2 1/2" of movement when everything is all sealed (NOTE: I need to measure it once again to make sure that is accurate, now that the cannon is finished).

So now I marked with a pencil where the bushing had to be when glued and also marked a spot 4" beyond that as a reference point. The bushing was then slide forward about 3" from the final point and glue was applied to the pipe and the inside curved area of the bushing. Unfortunately when I finished glueing, I found the glue was drying a bit to quick before I could pull the bushing down to the correct space. So the pipe was stood vertically quite rapidly and the bushing was yanked down hard and then pushed back up into the correct spot. Needless to say, about 9" of the pipe is now "blue." :)

One of the trickiest parts to glue was between the 4"x3" bushing and 3"x2" bushing on the front end (hardware store was currently out of the Sch40 4"x2" solvent bushings). Since the 2" PVC pipe was already going through the 4"x3" bushing and could not be removed, the 2" pipe ended up with a second coat of glue while trying to glue the 4"x3" bushing. At this time I'm not certain if I have a solid seal between these two bushing's. I will know once I get some TFE paste to seal the front 4" male adapter. If it's not a solid seal, then I will have wasted about $15 of hardware. ARGH!

NOTE: All PVC parts in the following item lists MUST BE LISTED AS SCH40 OR HIGHER! Thin wall PVC pipe will not work and has a higher chance of rupturing at high psi. BE CERTAIN the 4" reducing bushings list SCH40 somewhere on it (usually on the lip). When I was at Eagle, I found a lot of non-SCH40 4" reducing bushings. The bushing should almost be a solid piece of plastic with large supporting "fins". The non-SCH40 bushings almost look like a 4" cap with a 2" hole in the center!

Items need for assembly of the piston and bumper: